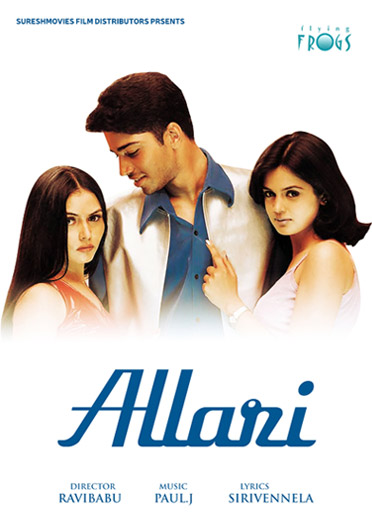 Allari is a 2002 Telugu film which marked the debut of Ravi Babu as a Director and Producer of Telugu films. The film became a sensation on release and set the trend for new age love stories and romantic comedies made hence.

This is a story about a young man Ravi ( Naresh)who belongs to a middle class family .His father (Kota Sreenivas Rao) runs a small business and is quite tight fisted when it comes to money. Ravi’s best friend Aparna- Apu (Swetha Agarwal) lives in the same building as Ravi. Apu and Ravi have grown up together and share a very special friendship and Apu has always been there for Ravi whenever he needed anything- especially “money” . Both Ravi and Apu take each other for granted and are unaware of their feelings for each other.

Ravi has a crush on a new neighbour - Ruchi (Nilambari) who has recently moved into the flat opposite his flat. Ruchi enjoys all the attention and gifts she receives from the opposite sex and is quite a flirt . Ravi who believes he is deeply in love with Ruchi , writes a love letter to her and requests Apu to pass it on to Ruchi without revealing the source. Apu reads the letter and finds the content of the letter very childish . She re-writes the love letter making it more expressive and passes it on to Ruchi. The letter has the desired effect on Ruchi and she loves the idea of having a secret admirer.

One fine day, Ravi introduces himself as the person who has written the love letter and they start dating each other . The love letter ( which was not destroyed ) accidentally changes a few hands and leads to a whole lot of misunderstandings and confusion, especially between Ruchi's father and Ravi's mother. Apu starts feeling lonely and hurt and feels bad for her best friend who was so blind to the truth and during this period she realizes her true feelings towards Ravi. The last act comes, when Ruchi invites Ravi to her place saying that she was all alone and that she wants to give a 'special gift' to him on her birthday. Before Ruchi bestows her `special’ gift upon Ravi, their parents storm into the flat and it leads to a comical mayhem which ends with each character waking up to their own folly. Apu in the meantime has got into a medical college and was leaving town. Ravi gets a chance to read the letter he had written to Ruchi and realizes that it was Apu who had written the letter to prevent him making a fool of himself. The movie ends with Ravi being forgiven by Apu after he honestly expresses how he feels about her.

“Allari” had a novel structure, a romantic plot and characters that felt real life and next-door. Ravi Babu not only completed the film well in time before the release on 10th May 2002, but also unleashed marketing on a never-before-scale creating buzz about the film amongst youth. He co-produced the film and eventually sold the film partly to Suresh Films who distributed it. The film created a sensation at the box office and raked in money for the producers and fame for Ravi Babu as a new-age director of films that are metrosexual and urban in outlook. Of course, the stars and debutants in the film also reaped lifetime fame. Many of them have become stars in their own right and some of them still use “Allari” as their first name. For example, “Allari Naresh” is what actor Naresh, now a superstar comedy actor is better known as, thanks to the debut film directed by Ravi Babu. Both the critics and pundits of the Telugu Film Industry opine that the Telugu Film Industry has seen a milestone post-release of “Allari”. The film reflected a growing need of connecting with the youngsters with imaginative plots, crisper story-telling and state-of-the-art technical narration. Contrary to the prevalent norm, Ravi Babu shot the film entirely on 35 mm which created a new experience for Telugu film-goer getting saturated with full-scope films.

Many film-goers and trade pundits clearly felt the impact of Ravi Babu’s “Allari” was so phenomenal that the films are now distinctly divided as films before “Allari” and films after “Allari” because of Ravi Babu’s discipline of making films with a tight schedule, fresh starcast, taut narrative and shorter duration (not more than 2 hrs).

Shot on flat screen 35mm, non anamorphic, the screen suddenly feels smaller when you walk into the auditorium. But the selection of the aspect ratio gave the director enough lenses to play with and he gives us a funky looking film with songs that look like music videos.