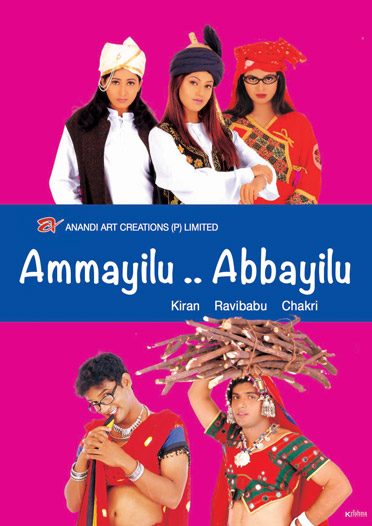 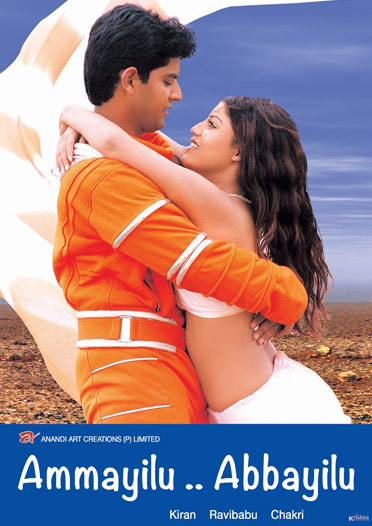 Ammayilu Abbayilu is the second film of Ravi Babu where he tries to build on the success of his first rom-com and gives his second film a larger scope and setting. Great music by Chakri and innovative concepts built into the visuals of lavishly shot songs are a big high of this film.

We have heard of love triangles but have we heard or seen love pentagons or polygons. Well Ammayilu Abbayilu is just that and more. The story revolves around Vara Prasad( Vijay Sai) a four foot something midget with a repulsive nasal drawl and equally repulsive chest hair.(His dad has the same and he is proud of how the genetic transfer happened). Vara Prasad is in love with the sexiest girl in the neighborhood, Manju(Vidya). But Manju falls in love with a new boy who moves into the neighborhood, Sanjay(Mohit). Sanjay meanwhile has his eyes set on another girl in the neighborhood, Anju(Debina). Unfortunately Anju is engaged to be married to Rakesh(Sonu Sood). Vara Prasad has no other option but to settle for wannabe witch Ranjani(Swapna Madhuri). The story goes through many a romantic twist and turn before all the characters finally get what they want and the bad guys what they deserve.

The sensational debut for Ravi Babu meant that he would now be less available as an actor. He started work on “Amayilu Abbayilu” with more mature actors like Sonu Sood, Dharmavarapu Subrahmanyam, and technicians like Chakri (music), Marthand K Venkatesh (editing) and fresh faces as boys and girls. The film turned out to be a musical success at the box-office making producers make a beeline for Ravi Babu who had caught the pulse of making films that connect with the young audiences. “Ammayilu Abbayilu” was released on 30th January 2003 and was hailed as another modern youthful entertainer which pulled the plug on current fads in romance. If “Allari” was a maiden effort with few faultlines, Ravi Babu’s second film made his craftsmanship stand out with maturity in dealing with an array of lead artistes and technicians and deftness in handling complex emotions. The film was lauded for the depth in characterisation of youth fraught with physical and psychological insecurities and narrated with humour.