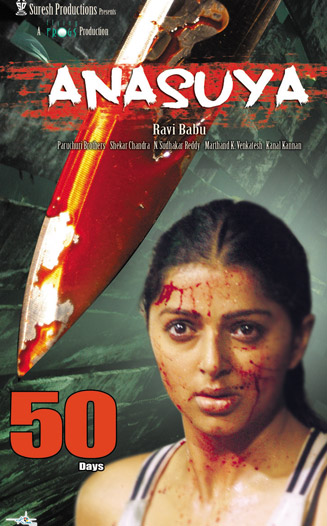 Anasuya is a 2007 Telugu thriller directed and produced by Ravi Babu. The film starred Bhumika Chawla, Ravi Babu and Abbas. The film created a sensation at the box office. It got successfully remade in Kannada as “Anu” and is now being remade in Malayalam with Bhumika in the lead.

Anasuya (Bhumika Chawla) is a young, passionate journalist who joins a local TV news channel as a reporter. She lives with her uncle Joseph (Shankar Melkote) in the city. On her very first assignment she had to go as an undercover, posing as a reporter from a women’s magazine in to expose suspected child labor in a local politician’s house . Anasuya successfully exposes the oppressive working condition of an orphan child called Lakshmi who is forced into menial work at the politician’s house. The politician throws the child out of his house to escape arrest. Anasuya shelters the girl and takes her home. The expose becomes a sensation Anasuya becomes a household name. She also becomes an instant favourite of her boss much to the irritation of her senior colleagues. Around this time a series of murders were baffling the police department. The murderer was taking an internal organ from his victims and leaving a red rose behind. When the police get reluctant to give the press information Anasuya is given the task of be-friending task force officer, Anand (Abbas) who was involved with the investigation, and getting information out of him.

Anasuya goes about her task diligently and even causes the arrest of Gvoind ( Ravi Babu) as the serial murderer. But the cops let him go seeing that he was an invalid with polio stricken legs. Not convinced with police theory Anasuya goes after Govind herself. In a gritty outcome of successive events Anasuya is thrown out of her job, loses out on love and is arrested and thrown in jail in her mad pursuit of Govind. Once out of jail she tries to unravel the mystery of Govind and hunt him down only to realize that it was she who was being hunted by Govind for one final organ to take and one final rose to give.

With a name that can pull in the audiences, Ravi Babu was getting ready for bigger challenges. In 2007, he makes his most audacious film till date with a female lead, Bhumika Chawla. Titled “Anasuya”, the film is a suspense-crime thriller with a plot that had impeccable screenplay and an engaging storyline of a lady journalist who is following the trail of a macabre serial killer who is stealing body organs of his victims. The film was produced by Ravi Babu himself and created a hysterical sensation at the box-office as audiences lapped it up in droves, in repeated viewing. The film got remade in Kannada and Malayalam. Ravi Babu earned his spurs as a native ace director with an eye on gripping narration, arresting screenplay and dramatic finish, sound in technical values and experimentation. The film also established Bhumika Chawla’s acting prowess and made her a leading female protagonist. With this film, Ravi Babu had established himself as a star director-producer who can turn any tale into a watchable film. He had proved that he had no set biases in movie-making and plot-selection and can make films in any genre that strike gold at the box-office.