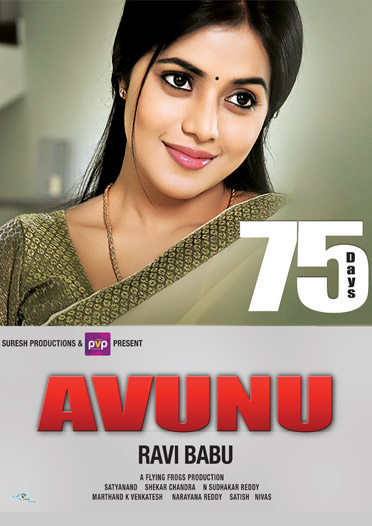 Avunu is a 2012 horror/thriller written, produced and directed by Ravi Babu and presented by Suresh Productions. Malayalam actress Poorna plays the lead role in this film that has Harshvardhan Rane playing the male lead. Score is by Shekar Chandra and cinematography by N. Sudhakar Reddy.

Long time lovers Mohini(Poorna)and Harsha(Harshavardhan Rane) get married and move into a new community where Harsha had bought a house. Harsha’s parents come to stay with them for a few days and also to make sure that the marriage is not consummated before a certain auspicious time. Unknown to the inhabitants of the house a voyeuristic spirit lived there and it takes a certain fascination for Mohini. Unknown to Mohini the spirit follows her around every where and finds pleasure in watching her change clothes and taking a shower.

Meanwhile in the neighbour’s who are friends of Harsha’s, have a kid, Vicky who can see spirits and have conversations with them. On a couple of visits to Harsha’s house he has a conversation with the spirit in Harsha’s house. Adults see this and dismiss it as the overly imaginative mind of a child at work.

When the auspicious day arrives Harsha’s parents leave. Mohini starts packing for the honey moon to Paris and the randy spirit in a fit of lust attacks Mohini and tries to assault her sexually. Terrified at being attacked by an invisible entity Mohini runs out of her house and seeks sanctuary in the neighbour’s house. A visiting relative of the neighbours, an old pious looking lady instills some bravado in Mohini and takes her back to her house. The spirit kills the old lady brutally. Harsha comes home to a terrified Mohini who wanted to leave the house right away. But circumstances force Mohini and Harsha to stay in the house one more night before they left the house forever. That night proves deadly for both of them.

In 2012, Ravi Babu made another out of the box film with “Avunu” (Yes!). It was a spooky thriller where an unseen ghostly presence loomed large over the heroine Poorna (Junior Asin). The film itself has an improbable origin. It seems Ravi Babu was chatting with the heroine Yamini Gautham (from “Nuvvila”) who gave a scary account of some invisible “force” at her home in Mumbai. That conversation with Yami got Ravi Babu thinking. The result was “Avunu”, the most successful ghost based film of the decade in Tollywood. Audience loved the film for the novelty in experience seldom seen in “spirit” films which are mostly shot in night-time. In “Avunu”, most of the film was shot in broad daylight and the camera also gets its maximum exposure in the sun, making the film a riveting watch. It’s the story of a newly wed couple moving into an apartment occupied by an evil spirit that lusts for the female lead “Poorna”. Prior to the release, the promos of an elephant strangling the heroine created a sensation. It once again showcased the creativity of the director in using impactful visuals that intrigue the audience and create the right buzz for the movie. The film was produced and directed by Ravi Babu himself – and went on to become one of the top grossers of the year in that genre. Once again, there were no songs in the film but the film became a big hit with remake rights going up for the Hindi version and the Tamil version. Made on a budget of Rs.45 lakhs, the film grossed multiple times its budget. The film is testimony to the versatile range of Ravi Babu that he is at home with supernatural thrillers as much as crime and romantic entertainers. The Hindi version has attracted the likes of stars like Anushka Sharma with PVP Films buying the rights of the Hindi version. If the starcast is right, Ravi Babu has said he will direct the Hindi version of “Avunu”.

A true blue horror film with all the thrills and chills. But what makes it unique is that every shot in the film is a steady shot and very unlike horror films is shot in broad daylight mostly and yet scares you very effectively. Another interesting fact is the use of household objects like dust-bins and comforters to create terror.