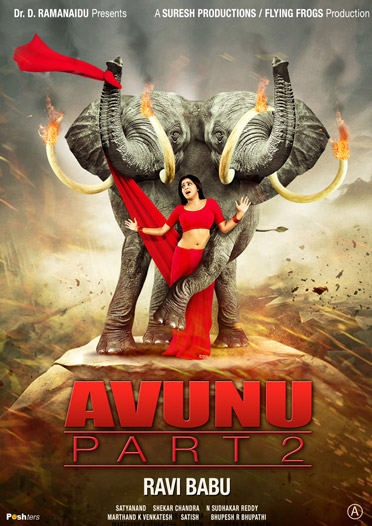 Avunu-Part 2 is a 2015 sequel to the 2012 hit film Avunu. Poorna and Harshavardhan Rane play their same roles from the first part. The film is a true sequel in the sense that it picks up exactly from where the first part ended. The film is produced and directed by Ravi Babu and presented by Suresh Productions.

With the past behind them Mohini and Harsha decide to move from the suburbs and settle into a plush apartment in the heart of the city. Having left the spirit of Captain Raju in the suburbs and armed with a talisman around her neck Mohini starts feeling safe in the new set up. Harsha and Mohini look forward to the long pending consummation of their marriage.

One day as Captain Raju’s luck would have it, the talisman comes loose and Mohini removes it for a brief period of time to find a pin to secure it. That little window of opportunity is enough for Captain Raju to create mayhem.

In the final act Captain Raju plays a game of cat and mouse with Harsha and Mohini and other characters to achieve his goal of deflowering Mohini before the stroke of midnight. Now only God could save Mohini and did he?

In 2015, Ravi Babu returned with a sequel to “Avunu” titled “Avunu-Part 2”. Once again the visuals of a two headed elephant disrobing a girl caught the imagination of the audience. The film opened to thrice the size of the first part and the audience who loved the first part lapped it up in style. The franchise value was maintained with a decent run at the box office and the debate on which of the two parts was better continues. But nevertheless “Avunu-Part 2” was a technical marvel

A very gripping narrative and once again innovative use of common household objects to create a feeling of terror. It is the fact that it is the true continuation of the first part where the climax of the first part is the first scene of the second part. It is for all those fans who were wondering what happened after that last shot in the first part.