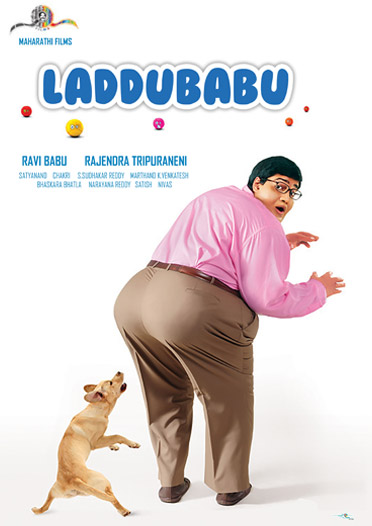 Laddu Babu is a 2014 film starring ‘Allari’ Naresh and directed by Ravi Babu and produced by Tripuraneni Rajendra. The slim ‘Allari’ Naresh plays an extremely obese man in this romantic comedy.

Laddubabu(‘Allari’ Naresh) is a slim good looking man, until a mosquito laden with a strange virus bites him. Within months he becomes enormously obese in an irreversible condition. His unnatural size becomes a problem for his father Kishtayya(Kota Srinivasa Rao) because he wanted to get his son married fast. His sons wedding meant that Kishtayya would inherit his ancestral home which he planned to sell and move to Goa. But Laddubabu’s size was making his plan difficult. More than his size it was his attitude that prevented him from marrying all the girls his father tried to set him up with. Laddubabu wanted to find true love in a dream girl.

In another part of the town Murthy(Atulith), a ten year old boy who lived with his widowed mother Madhuri(Bhumika) was making plans with his friends to make Laddubabu’s life miserable because he refused to be friends with Murthy.

Laddubabu meanwhile sets his eyes on Maya(Poorna) and falls in love with her. He starts making attempts to bump into her and woo her. But his enmity with Murthy comes in the way. Not knowing that they were destroying Laddubabu’s love life, Murthy and gang torment Laddubabu and indirectly make sure that Laddubabu never got to woo Maya.

One day when Laddubabu doesn’t go home on time9Because of a Murthy prank) to meet a set of twin girls arranged by his father, he is thrown out of the house. As he sat by the roadside and wondered where to go, Murthy comes to his side, makes friends with him and takes him to his house.

Laddubabu meets Madhuri, Murthy’s mother who though initially reluctant, but yielding to Murthy’s pressure doesn’t mind having Laddubabu stay with them. Laddubabu’s fortune suddenly turns around and Maya comes into his life in style. But what he did not know was that Maya had a fight with her handsome boyfriend and wanted to show him that she could actually settle for a very ugly guy. Laddubabu who did not know any of this, blissfully courts Maya.

Laddubabu steals money from Madhuri and uses it to get his flab surgically removed for Maya. Just then Maya makes up with her boyfriend and decides to marry him. She actually tells Laddubabu that she liked him better when he was fat. Laddubabu is heartbroken at this development and is even more shocked when he gets to know that the real reason Murthy had befriended him and taken him home was to marry his mother Madhuri.

Torn between the guilt of having stolen from Madhuri who was so nice to him and the heart rending deceit of Maya, Laddubabu agrees to marry the twins his father had set up for him. If he married them he would make money that he could use to pay back Madhuri. The film suddenly takes a new turn with Murthy developing a chronic health condition.

In 2014, Ravi Babu teamed up with Allari Naresh to create a comic story “Laddu Babu”. It shows Naresh as a morbidly obese youth with a tender heart. Ravi Babu had a team of international prosthetic artists work on Naresh’s super fat look. The film won critical acclaim but got mixed response at the box office. Being very different than a standard slapstick Naresh film turned out to be the film’s undoing.