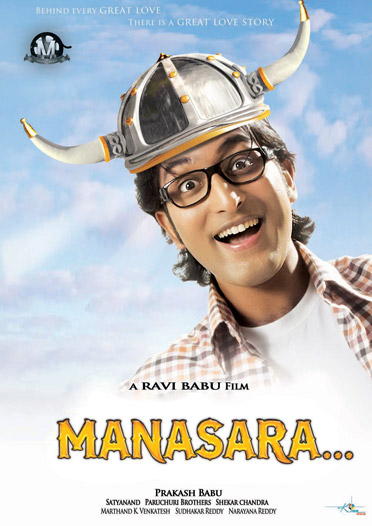 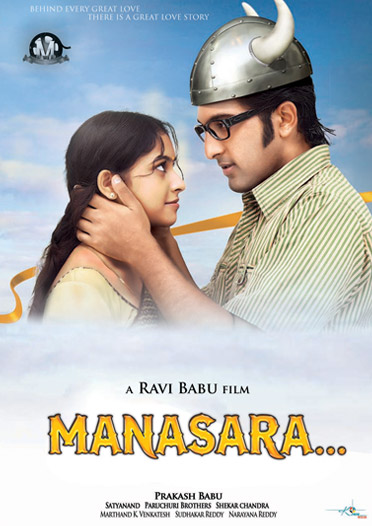 Manasara 2010 is a love story set against the backdrop of Kalaripayattu, a martial art form that has origins in Kerala, a state in India and is considered the mother art from which other martial art forms like Karate and Kung-fu evolved. The film is produced by Prakash Babu Kadiyala on directed by Ravi Babu and stars debutants Vikram and Sri Divya

Rajapalayam in Kerala is a village where time has literally stood still. A maternal, ritualistic society where honour held its head and sword high. The village folk lived and breathed Kalaripayittu that was their God, life and justice and were totally cut off from the modern world. Vikram’s(Vikram) family had to move to this village when his father’s job gets transferred there.

Anjali( Sri Divya) is a village belle who teaches blind kids. Vikram falls in love with her but conscious of his average looks is not sure the pretty Anjali would accept him. His local benefactor Krishnan Kutty(Bhanuchander) tells him that the secret to gain a woman’s love was not good looks but to have a good heart. Show her your heart, not your face, Kutty advises Vikram. Vikram follows the advice and masks himself and starts helping Anjali in difficult moments. The goodness of Vikram melts Anjali’s heart and she falls in love with him.

But trouble was brewing in Anjali’s home as her wicked step-mother tries to get Anjali closer to Rajan. Rajan was the national Kalaripayittu champ and the devil incarnate when it came to women. He was also the brother of Anjali’s step-mother. Anjali’s relationship with Arjun is discovered by Rajan and Anjali is locked up in her home. Rajan thrashes Vikram in front of Anjali and makes him lick his sandals in front of Anjali to show her Vikram’s cowardice. Vikram’s family is told to pack and leave town immediately.

Krishnan Kutty intervenes and calls for a meeting of the village elders. He tells them that Vikram’s only mistake was that he had fallen in love and that Anjali was in love with him too. He tells them that since their society was maternal the girls wishes had to be respected. But the village elders ordain that Vikram was not a local and had to forget the girl and leave. But on further persuasion by Krishan Kutty, they reconsider their decision and deliver their verdict. Since the girl had two suitors, only a bout of Kalaripayittu would determine who her husband would be. The winner would get her hand.

In 2010, Ravi Babu directed “Manasaara”, an enchanting love story set against the backdrop of Kerala with a unique blend of action based on the ancient martial art of Kerala called “Kalaripayattu”. The film had legendary writers Parachuri brothers pen dialogues for the first time in a Ravi Babu film and had screenplay by another legend Satyanand. While the lead pair is young, Ravi Babu picked an actor who’s passion for martial arts is all too well-known – Bhanu Chander. The film is also revelatory of the influence of martial arts gurus like Bruce Lee on Ravi Babu which shaped his earlier years. A new producer Prakash Babu Kadiyala produced the film set in the sylvan surroundings of Kerala. For the shooting of the film, Ravi Babu made at least four to five trips to Kerala to identify the best martial artists there. He masterfully blended the landscapes of Kerala to portray a beautiful love story with a canvass that befits the ancient martial art of Kalaripayattu. It is singularly the best martial film ever made in India and won the Nandi award for best stunt choreography. The film underpinned the talent of Ravi Babu to intermix different genres of films into one single frame. Shot in 90 days, the film created a moving cinematic experience for film lovers.

After a long time Bhanu Chander exhibits his martial arts skills in Telugu Cinema. Mellifluous music by Shekar Chandra makes Kerala, where the movie was shot, really feel like God’s own country