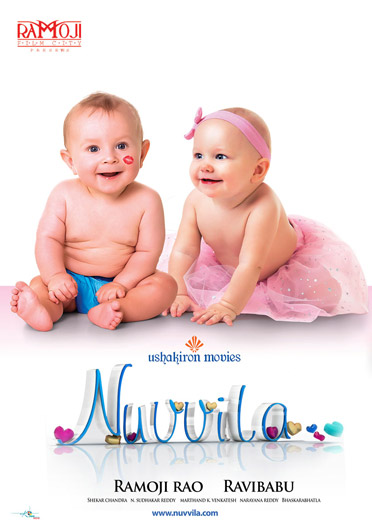 Nuvvila is a 2011 Telugu romantic comedy written and directed by Ravi Babu. He introduces six new faces with this film in lead roles. Ajay, Havish, Prasad Barve, Yami Gautam, Sarayu and Remya Nambeesan. The film features music by Shekhar Chandra and is produced by Ramoji Rao.

A disillusioned student Anand(Ajay), a wannabe model Mahesh(Havish) and a prospective violinist Raju(Prasad) have one thing in common. All three of them work at Pizza Express as a stop-gap arrangement in the pursuit of their dreams. When one pizza delivery changes hands between them, three love stories are born. Anand makes a pizza delivery to Archana(Yami Gautam), who turns out to be his neighbour and falls in love with her. Mahesh goes to break up with his girlfriend Madhavi(Sarayu) and becomes the object of love of a gay man(Haleem). Raju goes for a violin audition and bumps into the hate of his life Rani(Remya Nambeesan) and life gets out of hand for him.

Love for Archana lands Anand in trouble when he learns that she was in love with a famous cricketer Vishnu. Trouble compounds for him when Vishnu dies and Archana was pregnant with his child. Anand shelters Archana at the cost of being thrown out of his own home. The gay man torments Mahesh and it comes to a point that based on circumstantial evidence Mahesh’s parents are convinced that their son was gay. Frustration peaks in Mahesh’s life when the gay man wants to marry Mahesh and his parents give their consent. The story is further complicated by the appearance of the gay man’s former lover (Chakravarthy) who wanted to sacrifice his love and get Mahesh married to his former gay lover. An even stranger set of circumstances keep leading Raju and Rani into each other. To avoid arrest and subsequent jail they are forced to marry each other only to be divorced soon. But in their brief time together they fall in love and get divorced much against their true feeling for each other.

In the end Anand and Archana are accepted as a couple by Anand’s parents, Mahesh and Madhavi get back together and Raju and Rani form a formidable team and get their own TV show.

In 2011, Ravi Babu made another college-oriented entertainer – “Nuvvila”, produced again by Ramoji Rao which released on 3rd November 2011. The film introduced Yami Gowtham, a top Bollywood model and a bevy of youngsters in roles that largely reflected the dilemmas of modern-age youth. The film had screenplay by Satyanand and a complex array of characters representing the young who were torn between feelings of love and anger, conflict between career choices of self and those chosen by their parents and so on. There was a message in the film of what youth should dwell upon instead of wasting their time and that went well with the audiences. The film also had special appearances by all the ruling music directors of Tollywood - MM Keeravani, Koti, Chakri, RP Patnaik and Kalyani Malik. Hit music and a witty, humorous narrative made the film an interesting watch.

The film is narrated by actor Sunil in his inimitable style. Nine wonderful songs by Shekar Chandra make the narrative very breezy. Yami Gautam who later became a major Bollywood star makes a debut with this film.