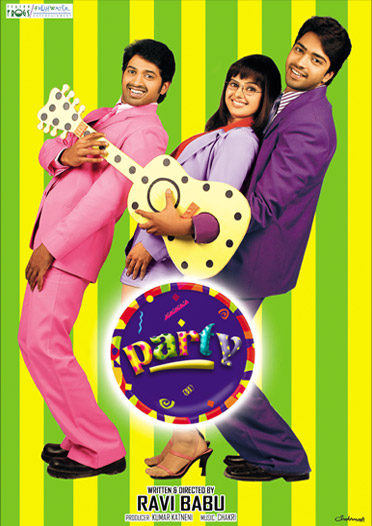 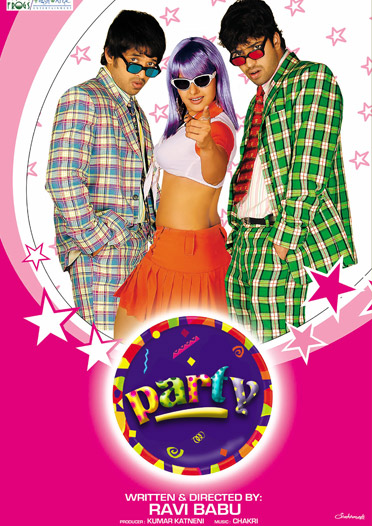 Party released in 2006 is a Telugu film, directed by Ravi Babu in the genre of comedy that makes a statement on the corporate environment shaping the IT world in the new millennium. Starring Brahmanandam, Allari Naresh, Shashank, Ravi Babu and Madhu Sharma.

The story is about two college buddies Bujji (Naresh) and Nani (Shashank) who get into trounle with a local don and need to pay him a crore of rupees to get out of the situation. Meanwhile a software firm (named Underware Hardware and Software Company!) headed by Rajendra Prasad (Brahmanandam) is facing a hostile take over by another firm. Rajendra Prasad had to build the world’s fastest supercomputer in time to halt the takeover. But the rival firm sabotage his invention. Rajendra Prasad had no option but to sell his company to his rival, but decides not to and explores more options. Meanwhile Bujji and Nani worm their way into Rajendra Prasad’s company promising to give him the technology for a talking computer that would bring him the much needed millions. But Rajendra Prasad is assassinated while in their company. Fearing that fingers would point to them, they hide his body. A look alike takes Rajendra Prasad’s place and tries to sell the company as quickly as possible. Rajendra Prasad’s daughter, meanwhile, falls in love with Bujji. What follows is a series of anecdotes that lead to the unraveling of the mystery of the killer of the original Rajendra Prasad and preventing the rival company Wonderware from taking over Wonderware thus keeping to the wish of the original Rajendra Prasad.

The plot moves with interesting references to the world of computers with names borrowed from the terminology used by geeks in the IT campuses, like Microchip and Potato chip are the code names used by two employees to sabotage the work of the company run by Rajendra Prasad. The role of a professional killer is played by Ravi Babu who kills only humans and not animals. But to his bad luck he ends up killing animals, accidentally, every time he tries to kill someone and is heart broken. This is a slapstick comedy with many inter-connected sub-plots that keep complicating the plot and adding to its hilarity. Lots of corporate espionage, sabotage, comedy and romance with a happy ending – that is the story of ‘Party’.

In 2006, Ravi Babu made “Party” a film that revolved around ambitious corporate executives who are dreaming up billion-dollar silicon valley ventures that will become the next Microsoft and Google. With characters euphemistically named as Dr Rajendra Prasad and John Abraham (real life names of actors) and code names of employees like microchip and potato chip, and names of companies like Underware and Wonderware (a dig at software names like maleware and hardware), “Party” was Ravi Babu’s sarcastic take on what goes on in billion-dollar software companies with an eye on Nasdaq-listing and multi-billion-dollar market caps. The whole film was a clean comedy fare with an attempt to capture corporate warfare that was ushered in by IT chieftains of the new millennium. The film’s release coincided with the rise of India as the new IT hub and got well-received at the multiplexes gearing up for the new cybergeeks. The film got huge mileage and fame for the iconic star comedian Brahamanandam (who plays a dual role). The film also established Ravi Babu as a sensible director who listens to the feedback on the ground and makes films in sync with the changing times. In the four years since he debuted in 2004, he had already made four films that reflected the changing tastes of the audiences.

Brahmanandam in a double role, Ravi Babu as the killer and lot of references to the world of computers.