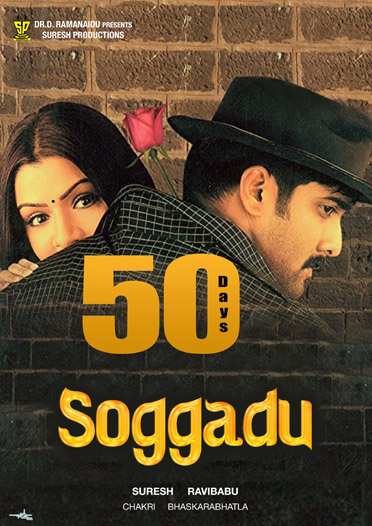 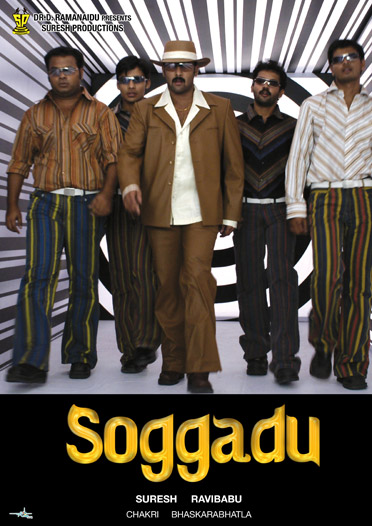 Soggadu is a 2005 Telugu film produced by D.Suresh Babu of Suresh Productions. Directed by Ravi Babu, it stars Tarun and Aarti Agarwal in lead roles. With special appearances by Victory Venkatesh, Shriya Saran, Srikanth and Sumanth, the film had a huge box-office opening, the biggest for any Tarun starrer. Soggadu won good critical appreciation and technical acclaim for the director Ravi Babu.

Ravi(Tarun), a school dropout and vagabond falls in love with Swati(Aarti Agrawal) the minute he sets his eyes on her, but loses sight of her in a sea of people and traffic. As only a possessed lover can, he tries to find her in a city of ten million people. Armed with just the first three letters on the license plate of her car, he tries to find her whereabouts. After tumultuous attempts and near hits and misses he manages to find her. Swati lived under the shadow of a tyrannical brother who was trying to get her married. Ravi manages to establish visual contact with Swathi and understands from her mute plight that she wanted to leave home. Ravi helps her escape home and is elated to know that she left home for him. But his bubble qhickly bursts when he comes to know that Swati had used his help to get to her lover Chandu(Jugal Hansraj).

But Ravi braves the goons who chase them and fights the tears of heartbreak and decides to help Swathi meet her lover. This draws ire from Ravi’s friends who had helped him all along in his love story. They think Ravi should dump the girl. He disagrees and they desert him. Armed only with unflinching, selfless love Ravi embarks on an adventure with Swathi to find her lover Chandu. Finally he manages to fight the goons of Swathi’s brother and unites Swathi and Chandu. Ravi’s selfless sacrifice melts Swathi’s heart and makes her wonder what true love was. Was it the love destiny threw in her path or was it the love of a selfless man who wanted to make her destiny come true?

“Soggadu” is Ravi Babu’s third film starring the ruling romantic pair of the day –Tarun and (late) Arthi Agarwal. Leading producer D.Suresh Babu came forward to produce the film which brought in bigger budgets. Already having gained a reputation for being dogmatic about casting, Ravi Babu had had a run in with the producer. For example, while the producer wanted Ravi Babu’s father Chalapathi Rao to play the hero’s father in the film, Ravi insisted none other than Kota Srinivasa Rao to play the role. The producer was eventually convinced. The film struck a chord with audience of all ages and got acclaimed as another urban classic with superb technical values and hit music by Chakri. The film’s trailer became a sensation before the release and woke up everybody to the potential of high quality movie trailers. Almost all the film-makers post-“Soggadu” have got their act together in making attractive teasers and trailers like “Soggadu”. The film got good reviews in Tollywood but received mixed success at the box-office. While Telugu audiences were not fully receptive to the comprehensive fare handed out by Ravi Babu in this adventure-rom-com classic, “Soggadu” was later re-made into a superhit Hindi film by Rajkumar Santoshi in “Ajab Prem ki Ghazab Kahani”. It is a tribute to Ravi Babu that his films are now finding takers from bigger film-makers outside of Tollywood. The Hindi film brought in enormous fame to Ranbir Kapoor but the original Telugu film made by Ravi Babu received critical acclaim as an action-genre film.

Breathtaking songs and visuals. Debut of Bollywood star Jugal Hansraj into Telugu cinema. Special appearances by Victory Venkatesh, Shriya Saran, Srikanth and Sumanth, all of them super stars in their own right. The film was unofficially remade into Hindi by Raj Kumar Santoshi with Ranbir Kapoor and Katrina Kaif as Ajab Prem ki Ghazab Kahani.